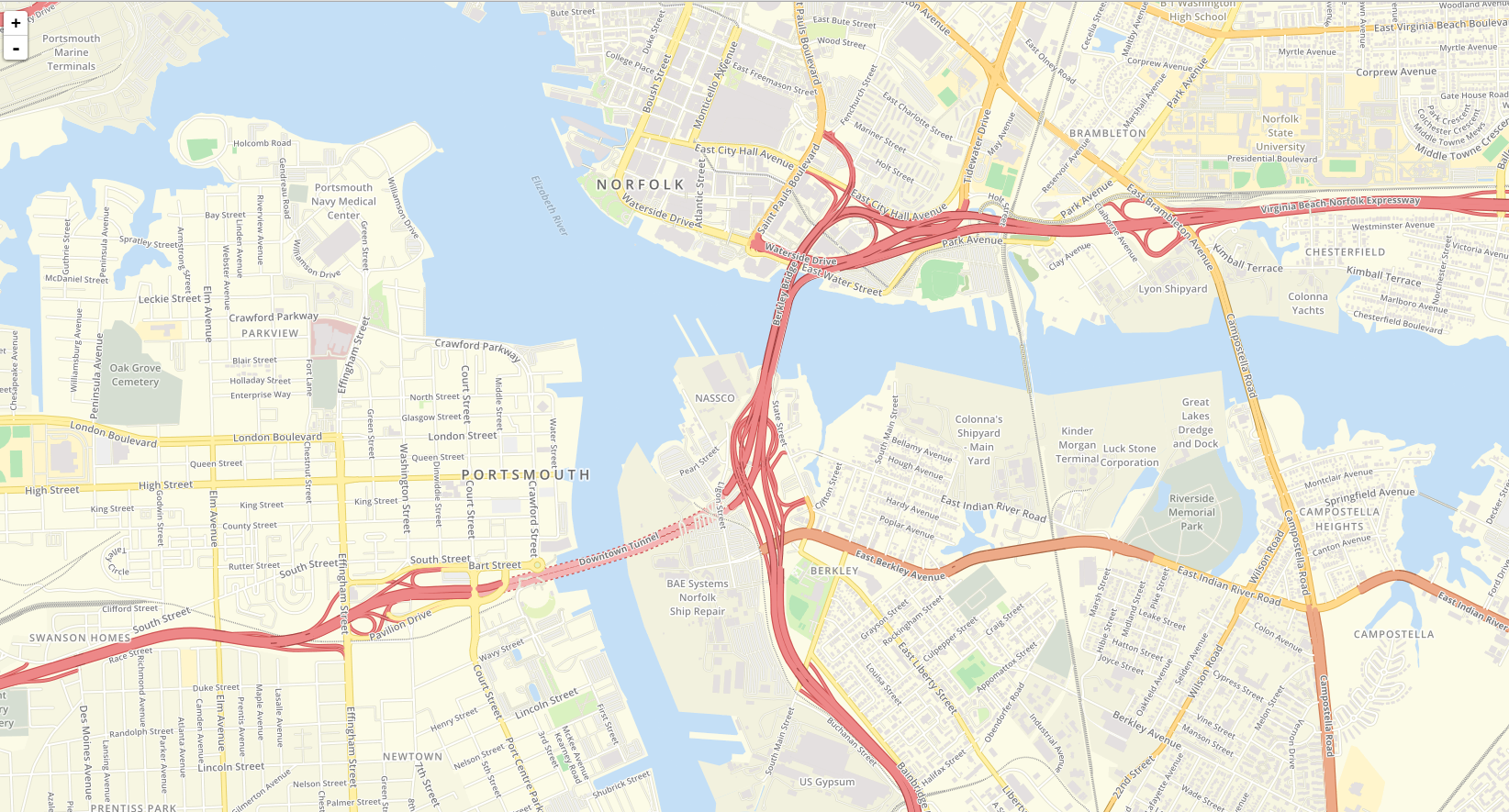 This page exists to document the process I went through when setting up a tile server for OpenStreetMap data. During the process, I found the Manually building a tile server page over at switch2osm.org very helpful, and it serves as a basis for this guide.

There are a few reasons you may want to set up your own tileserver: first, you may want to create or tweak map styles to create your own unique tileset; or, you may have an application that makes heavy use of mapping features and does not qualify for free use of the OSM tile servers.

It should be noted that the process described below will not allow you to perform geocoding with the imported data. Geocoding is the process of converting an address or place name to coordinates on the globe (or vice-versa in the case of "reverse" geocoding). For this, you'll want to check out the Nominatim installation instructions over at the OSM wiki. It also relies on the osm2pgsql tool, but the data is indexed and stored differently. With both the Nominatim and Mapnik datasets, you'll be able to perform searching, geocoding, and tile rendering without relying on external sources.

A full planet import on minimal hardware can take 8 to 14 days to complete. For a dedicated server with SSDs and a lot of RAM, this can be reduced to less than a day with optimal settings. Check out Hetzner or OVH to pick up well-spec'd a server for cheap.

We're going to need a whole bunch of stuff to get started. Thankfully, the packages in the xenial repos are recent, so we can install Mapnik 3 and friends via the package manager.

We'll also need PostgreSQL with PostGIS support. The commands below will set up Postgres 9.5 and PostGIS 2, as well as various supporting libraries that we may need for compilation of mod_tile and renderd.

mod_tile is a DSO module for Apache 2. It allows the user to define location(s) to serve tiles from (such as a /tiles/ URI in one of your VirtualHosts). It works in tandem with renderd, which utilizes the Mapnik library to do the actual rendering. Rendered tiles are then cached (either to disk, memcached, or Ceph) and used for subsequent requests until they expire.

We'll need to compile mod_tile & renderd ourselves, but it's an easy build. Below are the instructions for cloning the repo into /opt/src, but another directory can be used. The steps below assume you are running as root.

First, we need to point renderd to our config file.

Then open the configuration file (/usr/etc/renderd.conf) and make any necessary changes for your setup. Below are the changes I made:

Finally, to enable renderd to start when your machine boots, run the following:

Open the main configuration file. For PostgreSQL 9.5 on Ubuntu 16.04, this is located at /etc/postgresql/9.5/main/postgresql.conf. Below are settings that I have adjusted for my machine with 256GB of RAM and 40 cores. These settings have provided the best performance for me, and between 24GB to 32GB of cache seems to be sweet spot, if the benchmarks on the OSM wiki are anything to go by. These settings should be adjusted depending on the amount of RAM available and number of CPU threads in your machine.

The above configuration is for import only. Once you've successfully completed an import of OSM data into Postgres, the above parameters can be reverted to their defaults. At the very least, autovacuum should be turned back on, as it's responsible for reclaiming deleted objects, and helps to ensure your tables are optimal (unless you're doing manual VACUUM'ing).

For more examples, as well as other parameters you may want to tweak, check out the osm2pgsql/Benchmarks page on the OSM wiki.

First, open a Postgres shell as the superuser (postgres)

Next, create our osm user that will be used by renderd.

If you'll be running the import as the root user, you can use the following to grant root with superuser privs, just like the postgres user:

At the Postgres prompt, run the following to create a new osm database with UTF-8 encoding, owned by the osm user, and enable the PostGIS and hstore extensions.

The hstore extension is available in PostgreSQL 9.x, and is optional. It allows storing attributes as a hash/dictionary for fields that do not have corresponding dedicated columns. More info: https://www.postgresql.org/docs/9.0/static/hstore.html

If the import aborts or fails, I would recommend DROP'ing your existing database before trying again. In my experience, it seemed like osm2pgsql was not removing the existing data, but this may also be due to autovacuum being disabled.

To drop your existing database:

Then the creation commands above can be re-run to recreate your database.

Now it's time to import some data. Depending on your hardware, this can take anywhere between 8 hours and a couple weeks.

The --slim import process is divided into two phases: phase one is reading all of the nodes, ways, and relations, then caching & indexing them in temporary tables in Postgres; phase two is assembling the actual GIS tables that are used by Mapnik to render map tiles.

During the first phase, speed is primarily dependent upon your disk speed and amount of RAM available, as well as the type of file being imported (XML/bz2 or PBF). PBF is considerably faster, and there is no initial delay before node processing starts. Using a flat node cache also considerably speeds up the node processing if you have an SSD (creates a ~33GB file).

The second phase is more CPU-intensive, and depends upon the number of processes that are assigned via --number-processes.

Important note: If --number-processes is increased beyond 10, you will need to increase the max_connections setting in Postgres to 8x the number of processes. (eg. if --number-processes=16 then increase max_connections in postgresql.conf to 128, plus some buffer room). Don't forget to restart Postgres after any config changes. Failure to make this change will cause Postgres to reach max connections, and osm2pgsql will fail after the first phase. You don't get those hours/days back...

Click one of the links above to download your preferred data source, then choose a mirror close to you to obtain a download link for a planet-latest file, or a regional extract. With the link copied, wget it to your server. Unless you have good reason to do otherwise, you should choose a .pbf file, as the import is considerably faster.

Assuming you've downloaded your planet file, or a local/regional extract, we can proceed to the import. You'll almost certainly want to run this in a screen or with tmux. There is no resume support, so if osm2pgsql crashes, or you lose connection, or you accidentally hit Ctrl+C... then you'll have to start the process all over again.

Change to the directory that you want to run the import from, then adjust the parameters in the command below to suit your needs.

If you're using md5 authentication with Postgres, you can also specify the -H option for Postgres hostname, and then set the PGPASS env var with your Postgres user's password (eg. export PGPASS="supersecret"). In this example, we're using peer authentication with a local (UNIX socket) connection, so that's not required.

If using screen, you can use Ctrl+A then d to detach from your session, then screen -r osm_import to re-attach. 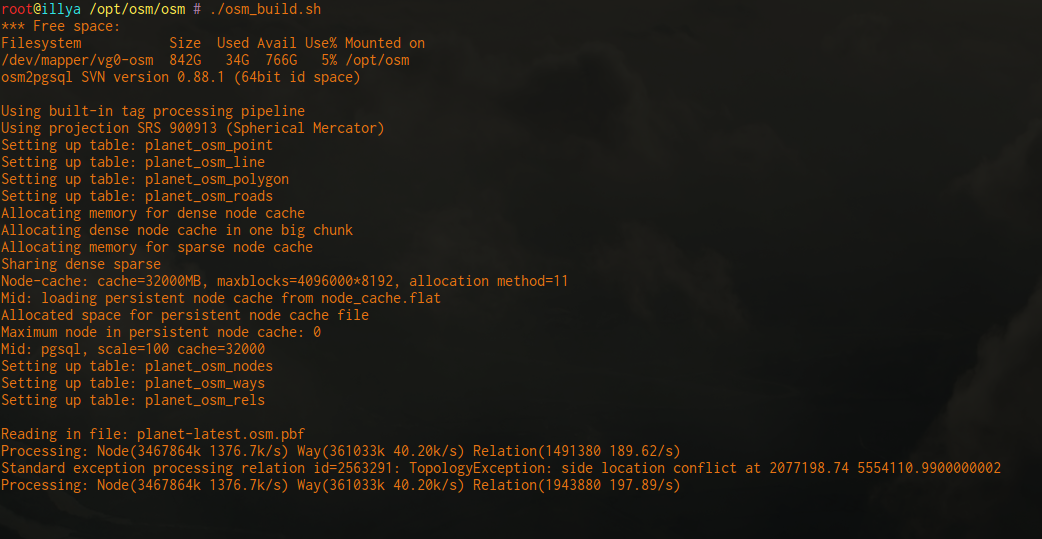