Taking a look at the settings and steps required to successfully set up and configure networking on a Windows 7 or Windows Server HVM domain on Xen 4.4 hypervisor running Debian

Getting networking to work in Windows under Xen is not a straightforward task, it seems. Here are my notes while attempting to get a Windows 7 domain set up on a server with Hetzner.

The host machine has a subnet statically routed to it by Hetzner, so we can't use straight bridging, because Hetzner's switches would just drop the packets from an unknown MAC address. So here, we take a look at setting up a bridge and using NAT in iptables to bridge the traffic from an "internal" 10.0.9.101 address to the machine's "external" IP address, 176.9.22.223 -- this IP is dedicated to this Windows virtual machine. Note that this type of NAT is basic or one-to-one NAT, since one address directly translates to another-- there's no port forwarding or any other nonsense.

The xenbr1 is a virtual interface and bridge with an IP of 10.0.9.1. Configuration from /etc/network/interfaces shown below. We will be adding our Windows domain to this bridge later on.

Set up on the client domain

Note that I could not get this to work at all with the Intel e1000 ioemu device on Windows 7 x64, but ymmv. I needed to install the GPLPV drivers to even be able to ping the dom0 host.

If you need to install the GPLPV drivers on a host machine without network access, try the following steps to create a new LVM volume that's formatted NTFS.

Check this page for signed up-to-date GPLPV drivers from Univention, as well as downloads for older versions of Windows and 32-bit OSes

Now that everything is ready, unmount our little bootstrapper volume, and add it to your domain's config as an additional disk.

Once the Xen Network Adapter is available, configure the following settings for IPv4. Substitute with your own settings where applicable.

Add the domain's interface, named vifXX.0 (where XX is the domain ID, run xl list to check, or better yet xl network-list DOMNAME). xenbr1 is a secondary interface with an IP address of 10.0.9.1 in this case. This should probably be implemented as a vif script or something, so that it doesn't need to be done or undone everytime the machine is created or destroyed.

Once you have destroyed the domain, its interface will be removed, and will in turn be removed from the bridge configuration. Keep this in mind when recreating the domain again.

Set up forwarding rules in iptables

After this, you should be able access the domain just as if it were directly connected to your main interface, eth0 or similar, with both ingress and egress traffic being directly forwarded. There is probably a more elegant solution for this, but this seems to work, at least for my set up. 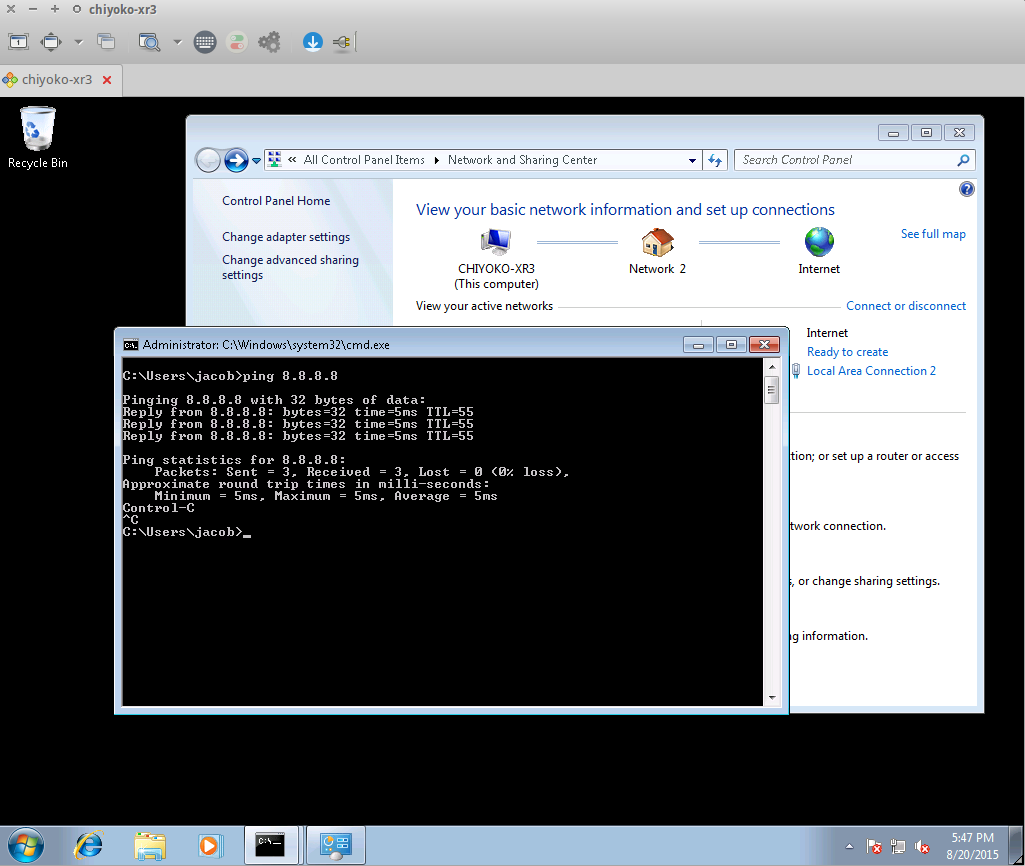